The workflow/ directory contains everything necessary to run the Drug Sniffer pipeline conveniently on a variety of computing platforms.

Container configuration can be found in the containers/ directory. However, Drug Sniffer users should not need to interact with the contents of this directory.

The individual components of the pipeline (stages) are described below. Although it is possible to use the pipeline without understanding the individual stages, this information is provided here to aid users in troubleshooting, and for completeness.

Each stage in the Drug Sniffer pipeline has its own Docker image. The images can be built all at once with the build-images.sh script found in the tool/ directory, which can be run from the repository root. This script accepts two parameters as environment variables, listed below. The default values should be acceptable for most users.

To build the image for a particular stage for testing purposes, run build-image.sh in the directory corresponding to that stage. To run the container, for manual debugging, use run-image.sh. To run the automated smoke tests, use test-image.sh. The tests rely on data files stored in the test/ directory and may write additional outputs to that same location when they run. 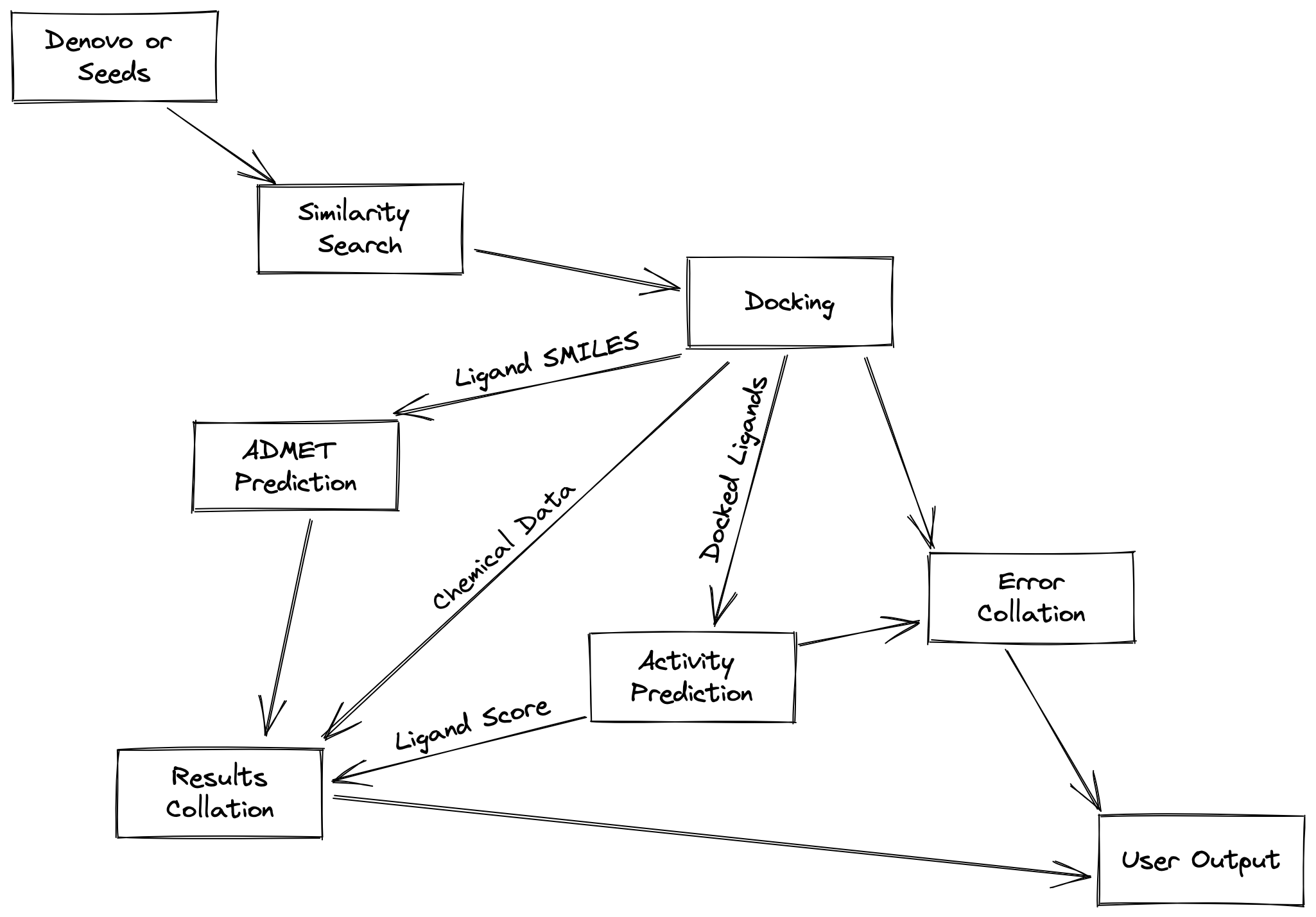 The diagram above illustrates how data flows through the Drug Sniffer pipeline. For the most part, users will not need to concern themselves with this.

Within each Docker image is a script, included in the PATH, called run.sh. This script serves as the API for the container. To run a stage, the user sets certain environment variables and then executes the script. All stages work this way. Required and optional environment variables are described along with each stage below.

The user is presumed to have chosen a target protein. For example, the SARS-CoV-2 Nucleocapsid Protein.

Pocket prediction is a manual process. Once a pocket has been selected, it is provided to the Drug Sniffer pipeline as a PDB file along with information about the pocket geometry. See Parameters for details.

Some common pocket prediction tools include ProBis, FTMAP, and POCASA.

One option for identifying leads is to dock a virtual library of pre-enumerated compounds. Alternatively, one may evolve drug-like molecules using a genetic algorithm.

In Drug Sniffer, we make use of AutoGrow4, an open-source program that uses an evolutionary algorithm to generate novel leads from a set of chemically diverse molecular fragments. The de novo process makes use of in silico chemical reactions to generate new compounds, and the population of compounds is iteratively refined over a number of cycles.

In order to remove compounds with undesirable physical and chemical properties, AutoGrow4 makes use of molecular filters such as PAINS and Lipinski rules. The molecules from the last three generations are set up as seeds to identify similar molecules in massive libraries.

The Docker container for this stage also uses Miniconda 4.10.3 running Python 3.8 to supply a Python interpreter and various dependencies for Autogrow4, which is in line with the recommended way to use this software.

This stage consists entirely of custom code but relies on RDKit (specifically the Python bindings), version 2021.9.4.

For the seed-neighbor molecules identified by the similarity search, optimized structures (lowest energy conformation generated using OpenBabel) of neighbors are docked into their respective targets using AutoDock Vina. The number of docking poses produced and the exhaustiveness parameter for the search for each ligand are parameterized by the user; the default values are 9 and 4, respectively.

The Autodock Vina seed value is set to 42 in order to facilitate reproduction.

This stage is allowed to fail since OpenBabel sometimes fails to produce a 3D structure. These failures are ignored because there is no reasonable way to recover and the consequences are generally insignificant.

The docking score produced by AutoDock Vina is only a loose estimate of the actual binding affinity. DrugSniffer adds 3 post hoc re-scoring methods (1) the Autodock Vina score (2) the SMINA score (3) dock2bind (the default) which is a neural network re-scoring strategy. The model is trained on ligand-protein complexes taken from the LIT-PCBA and DUD-E.

For each docked pose, 16 pose descriptors calculated by SMINA, along with the DFIRE estimate of protein–ligand potential are used as input to the model. dock2bind produces a value from 0 to 1 and can be thought of as the model’s confidence that the molecule binds to the pocket, constrained by the specific pose.

The model accepts the values below, in order, as a comma- or whitespace-delimited table:

The output of this stage is a comma-delimited table of values containing the columns listed below:

The absorption, distribution, metabolism, excretion, and toxicity (ADMET) of drugs plays a key role in determining which among the potential candidate structures are to be prioritized. The ADMET prediction here is based on molecular fingerprint-based predictive models. While a majority of the models are binary classification models, for some endpoints such the metabolic intrinsic clearance, acute oral toxicity in rats, plasma protein binding and elimination half-life, multiclass models are proposed.

Errors that occur in certain stages (those that tend to produce recoverable errors) are assembled into a single report and written to the path provided by the output_dir parameter.

Results are assembled into a single file and written to the path provided by the output_dir parameter.